Traditional finance is built around the concept of rational economic man. A person who acts in a rational way is considered risk-averse, has perfect information and strives to maximize their satisfaction (defined as utility by economists) according to a constraint such as a budget.

Utility theory is the bread and butter of traditional finance and neoclassical economics. Further concepts are theorized under the assumed premise that each individual is a rational. Let’s first consider utility theory according to classical economics. Consider Morgan, our rational economic human. Morgan has two goods to choose from, a juicy burger or a delicious Greek salad. Utility is defined as the amount of satisfaction derived from consuming a specific good. Using the burger as an example, let’s say that eating one burger provides Morgan with 50 utils of satisfaction. It is not necessary to quantify a util itself since such a measure is entirely subjective and is just used to develop the theory.

Morgan eats one burger and gets 50 utils worth of satisfaction. Great, but Morgan is still hungry and eats another burger. However this time only gets 45 utils of satisfaction. This is because Morgan isn’t as hungry as before and perhaps the burger is getting a bit rich with all the sauces. The same can be said for the Greek salad, the first Greek salad could provide 20 utils of satisfaction while the next only provides 18 utils. This is called the law of diminishing marginal utility, where consumption of one good provides less and less satisfaction as more of that good is consumed. Eventually Morgan will get to a point where consuming one more burger or salad will provide zero, and possibly negative, utility.

If Morgan could only eat burgers or salads and wants to maximize utility then it is calculated as follows:

Note: Morgan would not consume the last of either the burger or the salad because it would provide zero utility so there’s no point consuming. 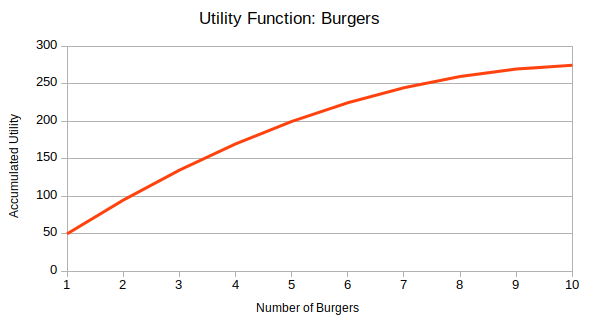 An assumption of the rational economic man/woman is that they will endeavor to maximize their utility at all times.

Let’s assume that Morgan wants to maximize utility at 300 utils by consuming both burgers and salads. According to the utility schedules above, the combinations of burgers and salads that provide 300 utils is as follows: Note that for illustration purposes we’ll keep burgers at round numbers (so Morgan will eat entire burgers) but might eat only a portion of a salad.

The table above shows that Morgan is indifferent between eating a combination of 5 burgers and 7.33 salads, or 8 burgers and 2.13 salads because either combination will provide total utility of 300 utils. We can then create an indifference curve for Morgan below. 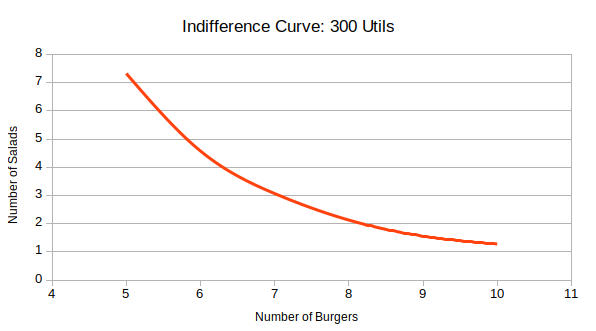 Right, now we have Morgan’s indifference curve, but what does this mean in the real world? It’s all good and well knowing which combinations of burgers and salads give Morgan the same amount of utility, but how does Morgan choose which combination to consume?

In the real world we are limited (well most of us anyway) by the amount of money we can spend. So we need to make a decision as to what to spend our money on in the face of a limited amount of it. This limited amount is represented by a budget constraint. For arguments sake let’s say Morgan lives in a world where only burgers and salads exist. Burgers cost R37.50 and a salad costs R16.67 (these are arbitrary prices and used to make the illustration work) and Morgan has a budget of R300. Morgan’s budget constraint looks as follows.

The graph above shows each combination of burgers and salads that Morgan could consume that would exhaust the R300 budget constraint. As an example, 18 salads at R16.67 is R300. 8 Burgers at R37.50 is also R300. Again, Morgan is faced with the question of how much of each to buy. The optimal combination to buy (the sweet spot) is found by plotting Morgan’s budget constraint against the indifference curve.

Morgan’s optimal combination of burgers and salads is the point where the budget constraint touches (is tangent to) the indifference curve. In this way Morgan is using the full R300 as well as getting the most satisfaction. According to the graph above, Morgan’s optimal allocation would be close to 5 salads and 6 burgers.

You might be asking yourself what burgers and salads have to do with investment decision making but I assure you there is method to the madness. The key takeaway points are as follows:

We now take the concepts above and apply them to the investment decision for an individual.

Next: Utility Theory: The Investment Decision